Time for more art! As one can tell, my passion is in portraits: 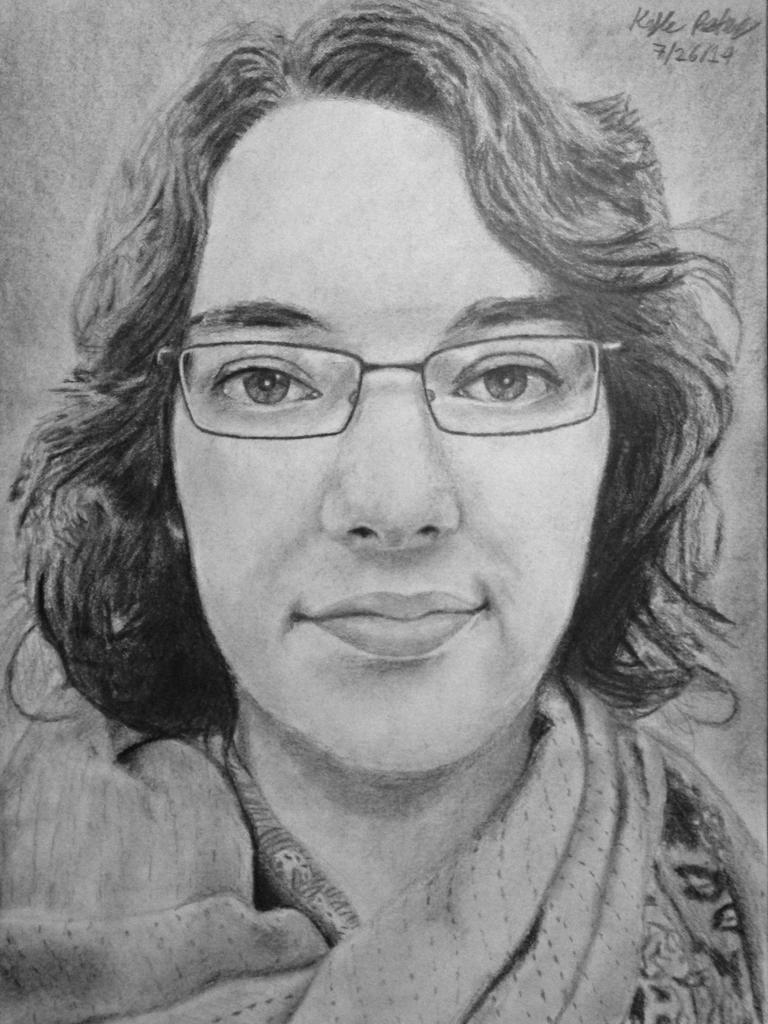 Kaylee Sharp, a friend of mine from New York. Attention was paid especially to the texture of her scarf and how it would help inform an otherwise very flat set of shapes. I am still rather fond of this one. 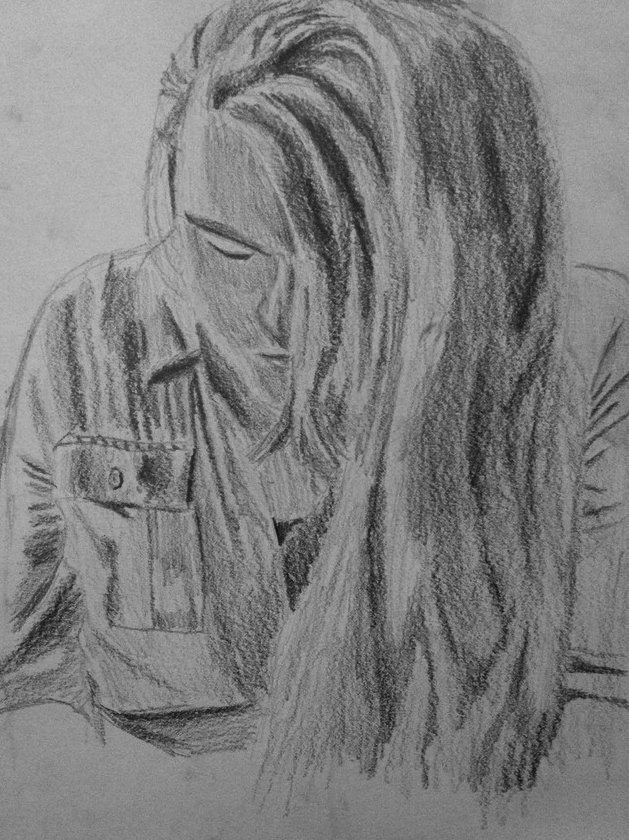 This is a live drawing I managed to catch of a friend years ago in community college while she was on her phone. I rarely get chances to do live drawings, mostly because I am not very fast at drawing yet and it is difficult for me to ask someone to sit down for a few hours and not move much. 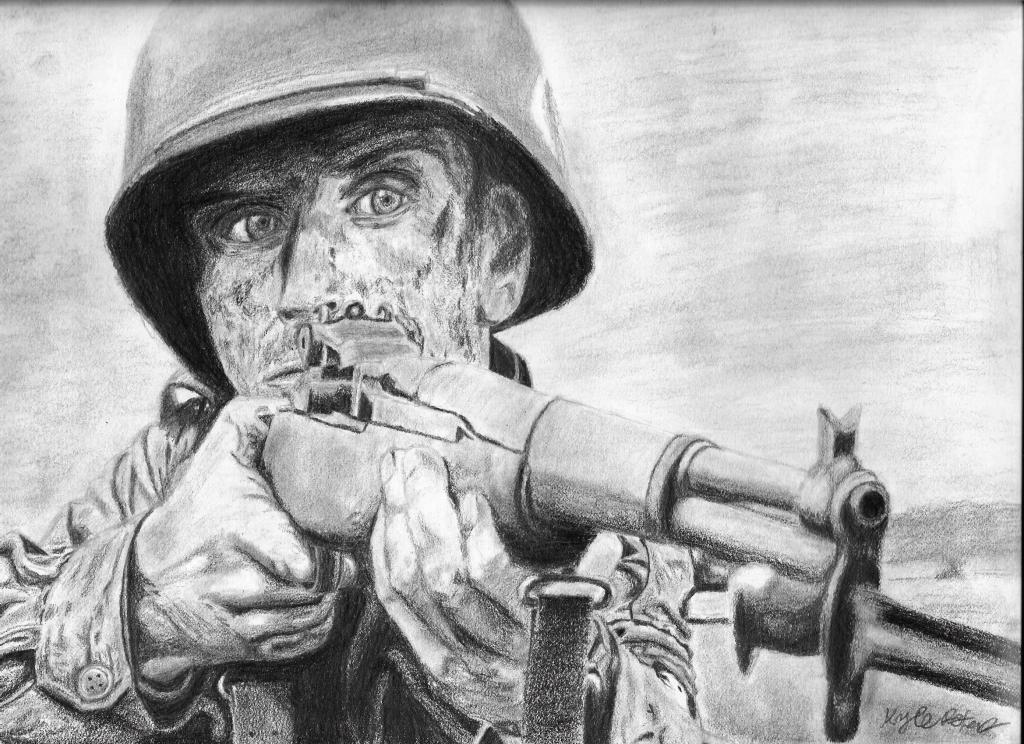 A portrait of Captain Richard Winters as depicted by Damian Lewis in HBO’s Band of Brothers. This was and still is one of my favorite war serials ever and I found the story of Easy Company captivating enough that I bought Stephen Ambrose’s book on which the show was based on. And of course, drew a study of both a tactically brilliant and ethical Army officer. Learning perspective was important for this one. 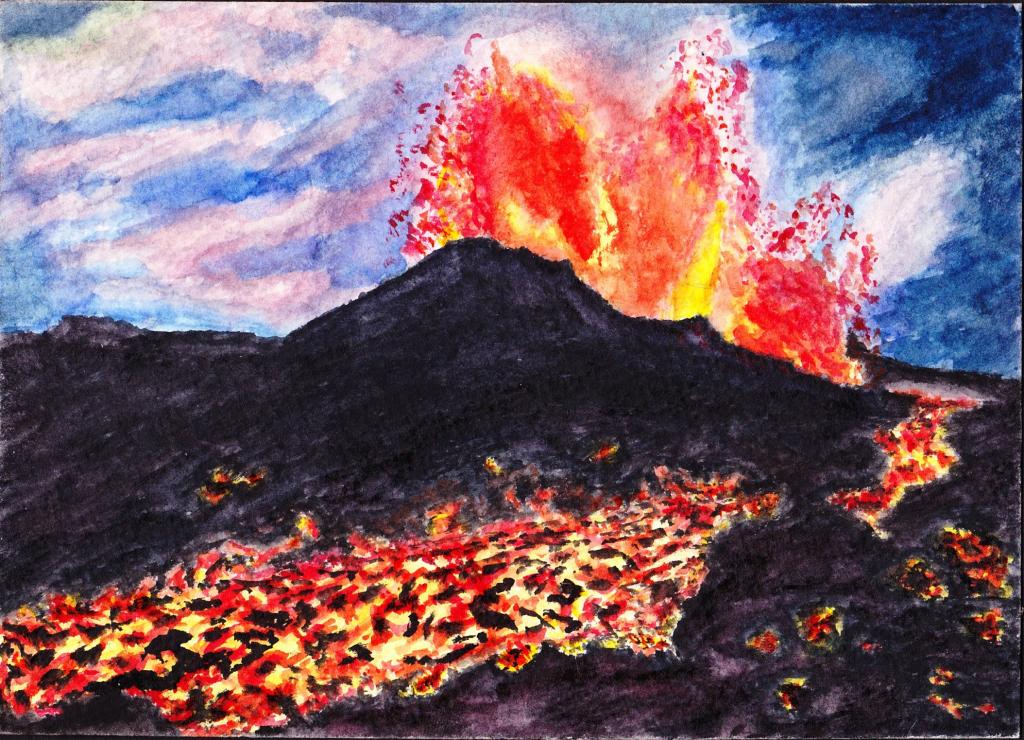 One of my first ever paintings, which I did in a high school art class using watercolor. I felt that an exploding volcano was quite striking, yet very different than the usual sunsets and flowers other students did. (I was very much a contrarian at the time – I refused to take Spanish language classes in high school because I considered it too “common,” which is the exact opposite reason why you’d want to learn a language). In retrospect, I did the best on the explosion itself and the clouds in the background, but not quite as well on the lava flow in front, which lacks depth and ambient light on the chunky obsidian floating along.

And to top this all off, this is my latest project completed here at the St. Stephen’s chapter house! (I was graciously given a little room and a tarp to use there). This oil painting on canvas depicts a “Desert Ranger” from post-apocalyptic fiction. Namely: the Wasteland and Fallout series which themselves draw a lot of influence from westerns, post-apocalyptic literature (like A Canticle for Leibowitz), and 1950s Atomic Age culture. This particular painting started as a study but a friend of mine offered to pay for it, so I will be taking it with me to California and dropping it off for him sometime during Christmas week. The writing on the helmet says “Chiropractor,” which is an inside joke between us and something he wanted depicted somewhere.

One thought on “A Return to Kyle’s Portfolio”