Definition: A native plant is one that occurs naturally in a particular region, ecosystem, or habitat without direct or indirect human intervention. We consider the flora present at the time Europeans arrived in North America as the species native to the eastern United States. Native plants include all kinds of plants from mosses, lichen and ferns to wildflowers, shrubs, and trees.
From: http://www.panativeplantsociety.org

There is also a strong, ecological connection between native plants and the insect and animal world, especially the bird population.  These populations have evolved with the native plant population and have become dependent upon certain plants. For example, an oak tree can support over 500 species of moths and butterflies, amongst other insects, while a Bradford Pear (a common ornamental non-native) supports fewer than 100. The more insects, the more bird food available. Most terrestrial birds feed their young insects. So although you might be providing food for the adult birds with ornamental non-native plants, you won’t be providing food for their babies, which will ultimately impact their population.

Native plants also contribute to healthier watersheds and cleaner rivers and streams. Their deep root systems stabilize soil and protect from soil erosion, and they mitigate the chemicals in water runoff from lawns and other sources. Rain gardens, a garden design that uses native plants, can capture excess runoff from houses and remove pollutants from street water. This means a healthier Susquehanna River and cleaner drinking water. 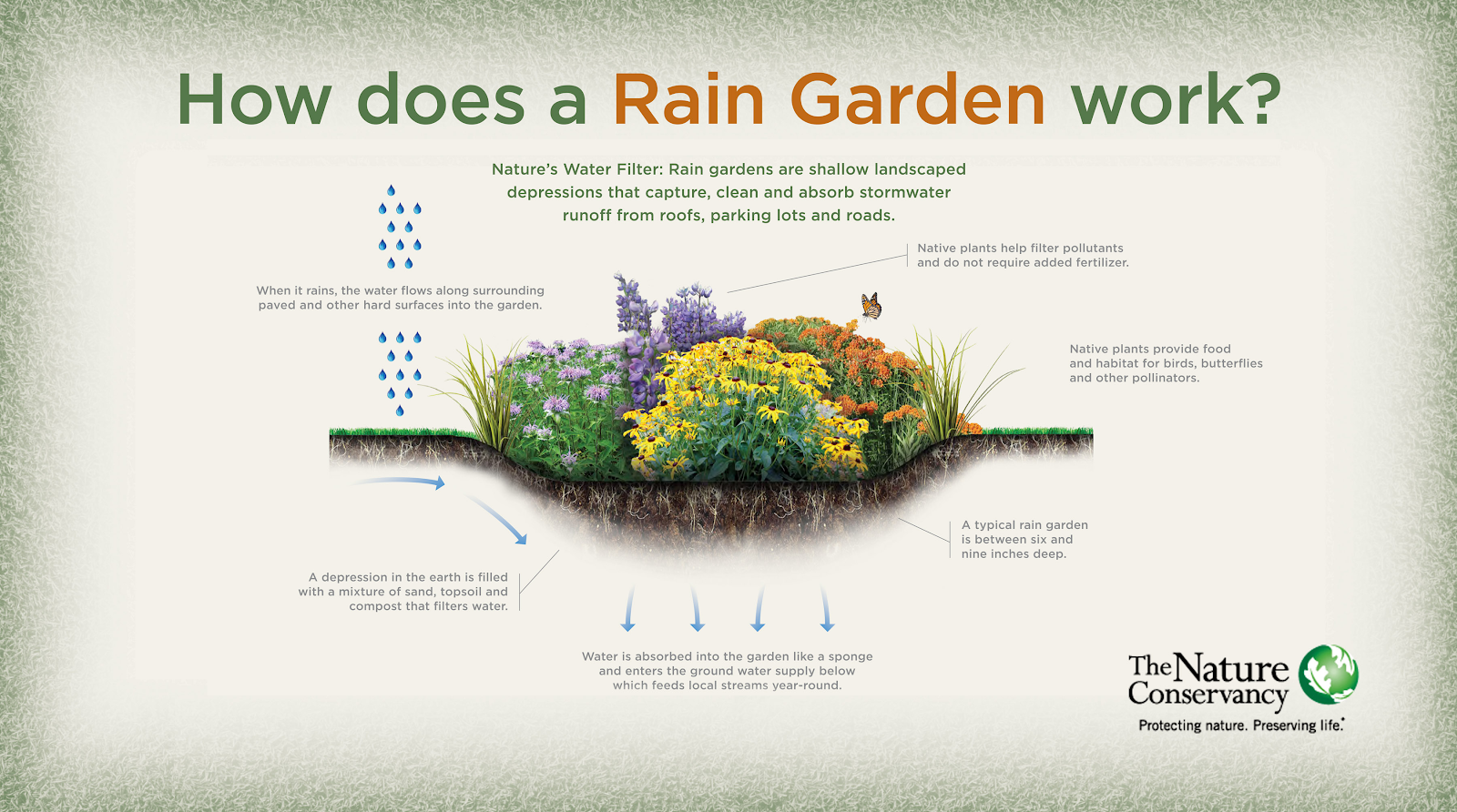 Planting native plants at St Stephen’s is a simple, easy way to practice creation care in our neighborhood and watershed. Through the cultivation of native plants on our ground, we can reduce runoff of from street pavement into the Susquehanna River. By choosing hardy native plants that will flourish here, we will save money on our property’s landscaping budget. We will also increase pollinator and bird habitat, promoting a healthier ecosystem right here in the city.
Planting native plant gardens on our campus is also an opportunity to educate students at St Stephen’s School and other members of neighborhood about the environment and our watershed, while letting everyone in the city know that creation care is important to us.
How can we bring native plants to St Stephen’s?
Some suggested next steps are:
If you would like to be involved in planning a community event with a Master Gardener here at the Cathedral in the next few months, or be a part of any long or short term work of bringing native gardening to St Stephen’s, please contact Chloe Selles at sycamorehouse@ststep.org
For the slides of this presentation, which includes pictures of some native plant species, go to: https://docs.google.com/presentation/d/1dLKKjZi7UcKgGQ77II-qAruNBCZ1ZjRvwjz0JL75-e8/edit?usp=sharing
Here is the copy of a “Native Gardening Guide,” which includes more information about the importance of native plants, a list of easy-to-grow native perennials, trees, and shrubs, and a list of upcoming local native plants sales.

Above image by Chris Sorge, used with permission under a Creative Commons License.

During our Friday sessions, some of our time has been set aside to discuss issues of social justice. Each of us will have the opportunity to lead the conversation on a matter that’s important to us, and Madi continued the series by sharing about Environmental Justice.

All of these different types of pollution and access to environmental resources are disproportionate when the majority race or socio-economic level of a community is considered. Households of color and those that are labelled as low income are more likely to live beside sources of pollution and health risks, like toxic waste sites, while also more likely to lack access to clean water, air, and land rights.

The history of environmental injustice is rooted in land access. When Europeans colonized America, they stole land from the Indigenous peoples. This land was then co-opted by wealthy white men, some of whom forced slaves to work it. Even when slavery was abolished, black Americans did not have the wealth to own land and were forced to work it again through sharecropping. When black soldiers returned from WWII a few generations later, they too were not allowed to participate in the benefits of the GI Bill (free education, access to a good home, etc.) like their fellow white soldiers were.

While the Civil Rights Movement and the Environmental Movement diverged in the 1960s, the fight for environmental justice was quickly growing in the latter half of the twentieth century. Cesar Chavez and the rest of the United Farmworkers fought for fair wages and the banning of certain deadly pesticides while Memphis garbage workers, led by Dr. King, went on strike to demand safer working conditions and wages paid for hours worked. Lois Gibbs brought attention to the severe health risks of living beside toxic waste dumps in Love Canal, NY while an African-American community in Warren County, NC protested a landfill proposal marked for their backyard. Even up until today, we still see high rates of asthma in black children living in urban neighborhoods, the fight to stop the building of pipelines running through water sources of marginalized communities, and the bombing of Pagan and Tinian. The fight for environmental justice is not a chapter of American history that is about to close—in fact, it is only just beginning.

The Church has a huge role in this fight. Genesis 2:15 tells us, “And Jehovah God took the man, and put him into the garden of Eden to dress it and keep it.” We often forget that in the Creation story, we were created second. God created the rest of the earth and saw it as good. Our first task as humans was to be stewards and caretakers of the garden—and God never told us that our job was finished. We also need to “Rescue the poor and needy: deliver them out of the hand of the wicked” (Psalm 82:4). This is not equivalent to the paternalistic holier-than-thou tone that the Western church has often had. Rather, this requires working side by side with our neighbors who are suffering, giving them the mic so that they can be heard, and choosing to do what’s best for the health of all of our collective future generations.

If you’re interested in learning more about environmental justice, check out the writings and work of Berta Cacares, Dr. Robert Bullard, Wangari Maathai, and Winona LaDuke.

If you have any comments or questions, be sure to start the discussion below. We will be continuing our social justice session next week with a discussion led by Elisabeth about ethical consumption of clothing and other items.

Above image by Lorie Shaull, used with permission under a Creative Commons License.

It can be difficult to know exactly what a service year looks like. In addition to the communal interactions we have as a house, each member of the Sycamore House engages in the community through a full-time service placement. For the next several weeks, you will get a peek into the world of each Sycamore House member, highlighting the unique contributions they make to their organizations. In Behind the Placement, you’ll be able to read about the projects Sycamore House Members work on, the reflections they’ve been having, and how it all ties into their year of service!

My service placement this year is with the Pennsylvania Chapter of the Sierra Club. As a national grassroots environmental advocacy group, the Sierra Club is largely volunteer-run. The majority of my work supports the state’s Ready for 100 campaign. Short for “Ready for 100 % Renewable Energy,” Ready for 100 is a national movement advocating for clean and equitable energy. Volunteers throughout the U.S. join the movement to urge their local legislators and decision-makers to make commitments to renewable energy and offer action plans to back these resolutions.

As the Chapter’s Ready for 100 Organizing Fellow, I provide support for new and existing Ready for 100 teams throughout the state, particularly the Eastern half. I co-coordinate the statewide team, planning and facilitating calls along with my co-worker Kelsey, an organizer for Western Pennsylvania. These monthly calls are a space for volunteer leaders from across the state to join, share updates, workshop issues, and plan state efforts. I also on-board new volunteers and help start new teams in places throughout Pennsylvania. Part of this means scheduling calls with volunteers, workshopping any issues they may have or connecting them with resources, information, or online trainings. And part of this means brainstorming or helping volunteer leaders plan events in their own towns and cities to build momentum or relationships with community partners. A goal for my position is to work alongside other staff and volunteers to create a Ready for 100 “toolkit” to provide easily-accessible, Pennsylvania-specific resources to teams so that the state team can move towards greater self-sufficiency before my position ends.

Over the past six months, I have greatly appreciated the way the Sierra Club as an organization and Ready for 100 as a campaign are both so dedicated to equity as part of a holistic approach to environmental issues. Ready for 100 commits to follow the “Jemenz Principles” for democratic organizing, which emphasize the importance of equity at all levels of a campaign or organization. They hold that there is no shortcut to just action and that justice is only done when all voices are heard.

In light of these principles, I have been challenged to model equity in the meetings that I host.  I am constantly learning new ways to facilitate discussions that allow all voices to be heard. And I have also been challenged to speak up myself, coming forward with new ideas or solutions.

The threat of global climate change and the ecological degradation of places I love have often made me feel anxious, terrified, and full of despair. I have realized that individual actions, no matter how honorable, are not enough to halt the patterns of destruction that our human greed has created. This year, however, I have learned a new way to address the destruction of our world. And that is, to organize: for the local communities, places, and people that we love.

Above image by Ken Lund, used with permission under a Creative Commons License.